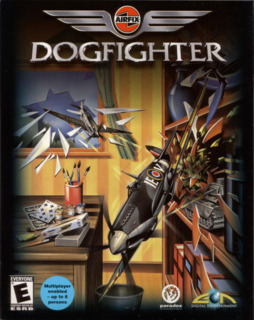 Even with its limited graphics, Airfix Dogfighter its a fun game to be enjoyed by everyone

User Rating: 7.9 | Airfix Dogfighter PC
By Hynnin | Review Date: July 20, 2007
Airfix Dogfighter its a simple game, the tasks are at hand and you must focus on your objectives so you can accomplish the game effectively, however it is difficult to progress as the missions get even more challenging. The airplanes are very easy to pilot, but they all have its weak points that can be used against you, not by the computer player, but by the own player if he carelessly fire at a fortified barricade without a proper attack plan.

The game is divided into two campaigns, the Axis, and the Alliance, the Axis are the German, with Italian and Japanese help as you progress in the game, the Alliance are the others as you may have read in the story books, with its help as the Axis, its fun to see both campaigns that look alike, but are different because you play in one said on one, and in the other side on another! Thats not the only difference, Axis have different special weapons and so do the Alliance, that means more fun.

Reading this, you may think we are talking about real aircrafts, with big and fortified bases to destroy or huge zepellins to avoid, but youre wrong, Airfix Dogfighter is a game that uses plane models and your own house as a battlefield! Try fighting incoming airplanes in the kitchen, anti-aircraft turrets in the living room, spies in the dinning room and zeppelins in the yard with plane models armed with crayons, paint missiles, battery rail weapons and much more! Thats the differential in this game, that really is worth a try.
Load Comments (0)