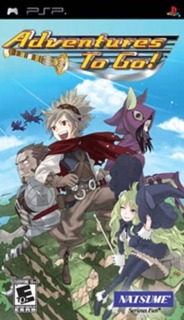 A traditional dungeon-crawler in the JRPG style, Adventures is solid, but bland and too easy.

User Rating: 6.5 | Chuumon Shiyouze! Oretachi no Sekai PSP
By Swoosie | Review Date: February 4, 2010
Recent popular dungeon crawlers (aka "roguealikes") such as Etrian Odyssey (DS) and Demons Souls (PS3) rely on high difficulty to keep you engaged and coming back for more. You battle through level after level of monsters, collecting loot and leveling up, with a little bit of story (very little) tying things together. Again, it's the combat strategy that makes these games playable despite being somewhat repetitive because you have to replay areas again and again to get better.

Adventures To Go! is one of the few of this style on the PSP. It offers similar gameplay -- there's a loose story leading you (and your eventual partners) to crank through an almost endless series of randomly generated levels, fighting beasties and collecting loot. You complete simple objectives ("bring me acid bug wings") to get more cash to buy better equipment, more potions, magic crystals, etc. Each "day" you get to venture a bit deeper/further, but you must first spelunk through all of the other difficulty levels to get to the new level. The problem here is that the first time you encounter a level it's pretty easy, and it just gets easier and easier, making the slog down to the new content each day a chore.

The good:
* Nice 3d isometric visuals as you wander in dungeons
* Colorful and reasonably detailed monsters and characters
* Some decent assortments of loot to be found
* Somewhat strategic (but again, too easy...) turn-based, grid-based combat.

The not-so-good:
* Repetitive as you re-traverse old levels -- they randomly generate each day, but really offer the same stuff just in different placements, and are so easy with scattered random combat that it gets very tedious later in the game to dig down to the newest stuff.
* Repetitive
* Repetitive
* You get the idea
* There's not enough story or interesting character interaction to make the repetitive slogging worth while.

Overall, it's not a BAD game, and if they'd just made it more challenging, it would've been a lot more fun. But for a very lightweight dungeon crawler, it's not a bad choice.
Load Comments (0)