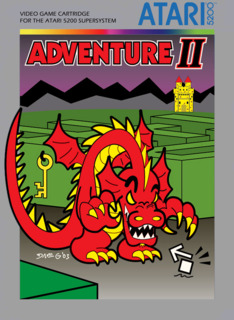 Adventure II starts out exactly the same as the original- you're a pixel in front of a castle. Right away you'll notice the developers used more colors, most being brighter. It doesn't give the game the right atmosphere at all. There's no gray! In a game about CASTLES! If the old one did something right, that was setting the castle-age tone.

There are however, many new screen designs, which is interesting. Unlike in the original, most of those are pretty wacky and unique designs, instead of boring gray paths. But they sure don't make it easier to navigate. For example, in one spot, you can go a screen to the right, and a screen up, and another to the right, and you end up exactly where you began. Tell me how that's not confusing as hell? It's a lot easier to get lost in this one. In fact, it took me 20 minutes just to find the second castle.

Another problem with adventure II is that the easy difficulty- is no longer easy. That infamous little bat that only appeared in harder difficulties on the original is in every difficulty on this one. The bat steals your items, and decides to throw them wherever it feels like. It makes keeping track of items such as keys you need, the bridge, and most important of all, the arrow, very difficult. The little bat can even carry around the chicken/dragon (yep, they STILL didn't revise the sprite) across the map, even after its dead. Trying to get an item back from it is just about impossible, and sometimes, if you drop an item for just a second, this bat will be all over it. You then have to chase the item down, which might require you to use the bridge, which means the bat will probably steal the bridge, which will put you in a 10 minute cycle of trying to get the items back in their appropriate places without the bat screwing you up. Fun, right? Oddly enough, the bat can actually steal the bridge right out from under you feet, even when you're using it to cross a normally impassable zone. if this happens, it will leave you hopelessly stuck, with no option but reset. And you know what resetting means? The dragon respawns. But where's your arrow? Good luck finding it, 'cause the bat probably threw it on the other end of the universe.

Remember how in Adventure 1, some screens were too narrow, and you had to restart because the giant chicken was in the entrance? Well, Adventure II didn't fix that problem. Slaying the Dricken (or Chagon) should be pretty easy though, since you encounter it early on, and the arrow is the first item you get. But I assure you, you'll have lost the arrow by the time you unlock the castle. And there are dragon-chickens in there. 2 of them, in fact. And it's dark. As if that wasn't enough, it's not a straight path, but a frickin maze. Once again, this was on easy mode. I would hate to see hard.

So if you run out of the castle, the dragons will follow you. Note, the castle exit is a very narrow screen, and the two chickens from the castle will not leave farther than this. Trying to enter at all to the castle screen, if both chickens chased you out, is absolute suicide. You'll be eaten before you can say "This game sucks". And if you reset, the chicken in the beginning of the game will come back alive, and follow all the way into your castle.
I've rambled on far too long. Needless to say, I did not finish this incredibly relentless and merciless game. I'm not missing much, I'm sure. Probably just a seizure, since the dang home-developers were too lazy to change anything in this game, other than difficulty and level lay-out(Meaning the seizure ending is probably still there). If you got money to blow (or an Atari flashback 2!) and you want to take a whack at one of the most ridiculously overrated and stupidest series ever, or your just an idiot, then this is the game for you!

Thanks for reading. I'll come back later with reviews of other Atari games that DON'T suck.
Load Comments (1)