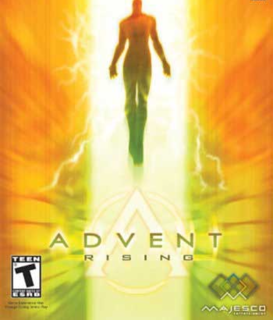 Advent Rising is so derivative and has so many persistent technical issues that it should simply be avoided.

User Rating: 2.5 | Advent Rising XBOX
By THE_DRUGGIE | Review Date: November 17, 2010
Science fiction is such a diverse genre with seemingly limitless potential. The technology, interesting worlds, and awe-inspiring creativity that go into such works left me wondering where the lowest point of such a fascinating genre could be. Thankfully (or more like tragically), I've found that bottom-of-the-barrel piece of garbage! Yeah, the excitement is pouring out of me as I type this...

In any case, Hal...Err, I mean Advent Rising fails to distinguish itself from any other Sci-Fi game in story, characters, and even the basic plot points. Speaking of plot, Advent Rising centers around a young (and stupid) space pilot who gets to talk to alien life for the first time because his war hero brother pulled some strings in the military. The aliens are friendly but warn that a seemingly invincible race of other aliens are going to come around and blow them all to kingdom come. Sensing danger, the humans return to the hangar and try to escape the invading Covenan...Err, I mean Seekers. You know what, forget the story. The story in Advent Rising is presented in short, poorly shot cinematics that barely have anything to do with the characters.

Graphics-wise, Advent Rising is riddled with issues. Right from the get-go, the frame rate is so slow and stops so many times that I feared the entire thing could freeze up at any moment. Even when there was no action onscreen the game chugged along like a participant in the last part of a marathon run. Even in cutscenes, the characters shake and jitter around for no reason while the frame rate slows to a crawl. Other than that, I guess Advent Rising can be given a bit of credit by having highly destructable environments. However, that ounce of credit is stripped away when the destructable pieces cause the game to nearly freeze if too many things blow up at once.

Another aspect of Advent Rising that is horrifyingly atrocious is the gameplay. Every single thing about playing this game is so hard to accomplish that it made me want to throw the controller at the TV. The good news is that my TV is still intact and the moronic enemy AI kept me from throwing any hard objects at my screen. Honestly, the enemies ignore the fact that I'm slaughtering them most of the time and instead go after the people accompanying me (who seem to have infinite health) without so much as batting an eye to what I'm doing. In fact, I was able to snipe an entire battalion of Seekers and none of them noticed that the guy standing right next to them got shot through the skull with a high-power sniper rifle.

Other than the idiotic enemies, targeting is another vice. Targeting is done by flicking the right analog stick toward an enemy. This sounds like a good idea on paper, but the execution couldn't have been any worse. In addition to targeting, the right analog stick is also used for moving the camera. What this means is that sometimes switching between targets can mean getting lost, getting hit from a blind spot, or even getting disoriented and falling to your doom. To be honest, the camera killed me a lot more times than the actual enemies!

Vehicles are also a source of a lot of non-enemy kills. To put it in a better way, the controls for the vehicles are so hard to get used to that you'll wind up blowing yourself up out of incompetence. The worst offender of the bunch is the Scythe, a Warthog clone that somehow manages to be harder and more frustrating to control than its predecessor. While the Scythe controls the same as the Warthog in Halo (left analog stick to accelerate, right analog stick to steer), the Scythe is so easy to flip over that you'll do five flips down a canyon because you edged a very small bit over to the left. In addition, some levels require almost perfect execution, making some areas seemingly impossible to get through. A blown-up bridge would be the best example of the immense frustration it caused since pieces of it would break away in a short span of time and it was oddly angled so I ended up dying well over 20 times! The only good thing is that there are checkpoints every couple minutes so you can fail to your heart's content.

On foot, Advent Rising is truly a snore-fest. Although most of the game is much better in this thrid-person/FPS fashion, many of the problems from the vehicle portions are still present. The shoddy targeting system is still present (and actually causes more deaths), the easiness of falling off a ledge is still present, and...Well...The lack of enjoyment is still present as well. The enemies are so easy to defeat that I started to think that they were made out of tissue paper and had gelatin filling. Regardless of what enemy you face, it only takes less than a minute to rip their spines out (sadly, you don't get to actually rip their spines out) and leave them for the buzzards. What makes the game even easier is the powers you gain along the way. It can be argued that weapons aren't even needed once the lifting power is gained a little ways into the game. With a flick of your wrist, any enemy can be sent flying to their doom without you breaking a sweat. With the exception of a couple bosses, the game is laughably easy as a whole.

By far, the worst thing in Advent Rising is the omission of any kind of map or guidance. Not only do you not have a map to figure out the layout of the area, there isn't even a compass to point you in the direction of the place you need to be. Although there are only a few open-ended areas, the instances where they exist make it so frustrating that I wound up having to start from the last checkpoint because I thought I was lost. Such a horrible lack of direction is insufficiently remedied by other characters telling you where to go. In most instances, you'll be so focused on fighting the enemies and the other characters' voices are so quiet that there's a very good chance that you'll miss whatever they were trying to say. For some reason, the developers didn't realize the characters were too quiet and didn't provide an option to use captions to grab the player's attention.

Overall, Advent Rising is a horrible game. Simply. Horrible. Even if you're a fan of science fiction, please avoid this disaster at all costs. I don't care if you own an entire replica fleet of Star Destroyer replicas, this game will not satisfy you. I cannot stress enough that Advent Rising is a game that should be forgotten and never brought up again. You know what, forget it. Forget this game and forget this review. Go read a book, take up a hobby or something, I don't know. Just don't play this game.
Load Comments (0)