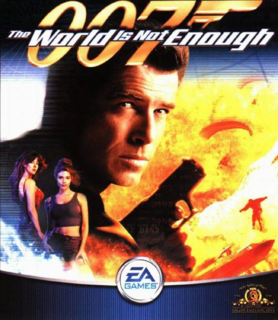 On the PSOne, The World is Not Enough revisits Doom-like controls and an overly short length experience that Bond.......

Game Title: The World is Not Enough

On the PSOne, The World is Not Enough revisits Doom-like controls and an overly short length experience that Bond nerds can easily beat through.

After Tomorrow Never Dies disappointment on the PlayStation the developers return Bond to the First Person Perspective that made Goldeneye on the N64 a huge success, however though the PSOne port of the game sadly doesn't carry the strengths of the N64 classic but at least in some ways it follows the movie.

TWINE on the PlayStation has about 11 missions that are loosely based on sequences from the film. You'll get a briefing from your allies at MI6 explaining about your mission objectives and gadget descriptions. Before and after each mission you're treated some FMV quality cutscenes which show clips from the movie and for the PSOne it's quite good, for those who watched the movie can skip those scenes and just get right to the game.

As I already stated that TWINE returns the famous British spy to a First Person Shooter where you have plenty of realistic weapons at your disposal. You'll get a gadget sequence where you can use creative devices like Telephone Bugs, a Credit Card Lock Pick, a Rocket Launcher Camera, a Cell Phone Scanner and a Grappling Hook Watch and a few others. The great thing is that all these gadgets are put to great use in some segments but most of the game involves moving from one explorable area to the next shooting down guards and completing very simple objectives. You'll hardly get much objective variety since nearly every involves a series of gunplay. Sure there are two stages that prohibit you shooting down guards but aside from those the mission objectives in the game are very straight forward and you can complete them without an trouble. One of the segments included in the PSOne version of TWINE is that there's a playable game of Black Jack, it's aright but there's a glitch I think where cards getting picked out but the game doesn't count the card number at all making progress in it more difficult. I never played Black Jack in real life so I wouldn't know.

TWINE's controls are the main issue because it goes towards the Doom style rather then using the superb controls found in Medal of Honor. This means you're forced to utilize the D-Pad ot Left Analog stick for movement, Inventory management and using on the main buttons and strafing mapped to the trigger buttons. You can aim with the R1 button but however the aiming is slow so you'll have difficulty trying to take down an enemy. You're simply better off with Auto Aim enabled because that makes targeting with these outdated aiming controls easier. It takes a while to get used to but at least there's a control configuration screen.

You can combine the control setup to the enemy AI inwhich for some portions it's okay but other times just stand around waiting to get shot. They will often times use cover or dodge, fall from a ledge and you can actually shoot weapons from their hands Perfect Dark style, well not always. Enemy spawns in some places can really be annoying if you're trying complete an objective and they'll kill you if you don't see them.

The game's length is quite short, it only takes a short while to learn about the stages and plough through them. First time Bond players will be able to complete it in about 4 to 5 hours of gameplay, there isn't even any replay value aside from having to get a Highscore for completing a stage or unlocking cheats if you actually do them. There's isn't many cheats to unlock in TWINE so it really isn't worth replaying any of the stages you already beat. Sadly the developers didn't learn from Tomorrow Never Dies by not including any Multiplayer Modes. Yep that's right, they didn't include a two player mode which is a total bummer unlike the Nintendo 64 version which does have it. It makes the game a very short lived Bond experience that only lasts for an afternoon.

The graphics aren't too bad for a PSOne game. The environments are reasonably detailed and colourful and the character models are quite nice even when up close. The weapon models are a mixed bag, weapon firing animations are good but however when holding some weapons like a shotgun, an MP5 or the P90 you'll see Bond holding the weapon with only one hand while you never see the other hand for reloading. Bond's hand model always show him in a black suit no matter the outfit that Bond actually wears in the stages.

The voice acting contains lines said by the actual actors of the movie with the exception of James Bond himself who is voiced by Tim Bentinck with only the likeness of Pierce Brosnan. The audio in the game consists of mostly remixes of the James Bond theme which is annoyingly repetitive twisted by very short looped tracks. At the sound effects are cool.

The World is Not Enough for the PlayStation One is an improvement over Tomorrow Never Dies and it takes some of the Bond style gameplay in a decent direction, but that's not really saying too much. The lack of a Multiplayer mode is inexcusable on top of the lackbuster replay value, Outdated Doom-like controls and bad remixes of the Bond theme will only give long time Bond fans a short lived experience that can easily be beat through. Besides if Medal or Honor can have very satisfying controls, Multiplayer and of course the great gameplay, why not TWINE? And this is on the same platform! Overall you would be best to play the superior N64 version instead and only play this game if you don't own an N64 or you only want to take a brief moment from the PSOne Medal of Honor titles.

1. FMV sequences from the movie

2. You get to play an actual game of Black Jack

1. Very short campaign with no Multiplayer

2. Some weapon models are unimpressive